Codebits as you might know is the most geekest event in Portugal and surroundings!

Its audience range goes from programmers and entrepeneurs to hackers and designers! This year 800 people came to participate in 3 days full of talks, challenges, games, demos and junk food!! 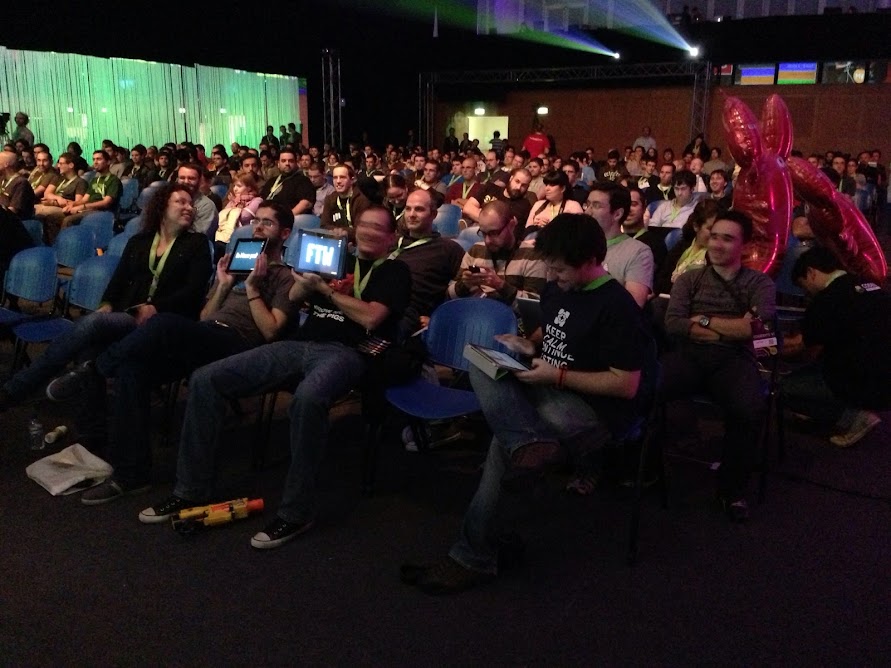 About our participation @ Codebits VI, at Artica we are extremely addicted to race games, Trackmania is only one of our favourites!! We still are addicted to race games but we usually don’t play them, instead, we prefer to create our own games.. :D we thought it would be way cool to drive a remote control car using a steering wheel and pedals, and if the car had a wireless cam, the gamer could look at the screen and really see what the car was seeing in real time, just like an arcade game!

This was our proposal to Codebits! To have an arcade game where it would be possible to drive two cars and participate in a real race, without any simulations or complex algorythms, neither 3D graphics.. we want something real! Celso Martinho was very excited with our idea, and by coincidence (or not) they were planning to have a retro gaming area at codebits!! Luis Sobral also known as TheArcadeMan, was the one behind the retro gaming area, Luis refurbishes old arcade machines and transforms them into brand new machines just like magic!

Besides having his own Arcades there, he was working on 10 old arcade machines, making them work with the so acclaimed Raspberry PI!!

Luis had just bought two old SegaRally Consoles, and there was the possibility to transform them to be the control station for our RC cars! On a first (of many) tours to Luis’s “mancave” we start disassembling the old consoles, removing the old electronics boards, wondering the best way to connect all the gear! There is a strange beauty in this sturdy mechanical systems, they are so well engineered and one can feel they were pushed into the limits through the years, and are still able to be pushed a lot more! This was the throttle pedal gear, on the right you can see a hand-made replacement, it was a cool hack to do.. and a miracle that it worked flawlessly all the event! At this stage we couldn’t imagine that one of the biggest challenges was about to come!! Yes, the CRT’s… to send Video signal to this old CRT is not impossible by any means.. but it prooved to be way to much complicated for us.. after many attempts and despair.. we finally decided to “kill the rabbit”!! We found two Mitsai CRT’s willing to have a new glorious life!!! :D And they fitted perfectly in the old frame! The steering, pedals, gears and buttons were connected to an Arduino, and data was sent via xbee to the car. The car had a receiver Arduino mapping the data to the wheels, throttle and to the video switch! The gamer could choose wich camera to use, the front camera proved to be extremely difficult to use and only hardcore drivers used it!! The upper camera needed a support, and it had its iterations due to be easily broken when the car crashes or capsize! The final iteration was a one PVC piece bended with heat, it proved to be sturdy and survived to the hole event! Finally at Codebits VI !! :D Artica had the honor to be at the Hardware Den with TheArcadeMen, Altlab, Ultimaker, InMotion, Mitch Altman and RaspberryPI Foundation.

The Sega Rally Championship Arcade was fully working all the time, we only need to stop a couple of times for final tweaks.. ..and to recharge batteries! To drive this things was extremely cool!! We are looking forward to repeat the experience!! As a final note, we want to give a big thanks to all SAPO and PT Team for making this event a reality, Mauricio Martins and Adriano Couto from AltLab for helping us with the CRT’s, Francisco Dias gave a major help with his hacking skills, João Ribeiro for being a true Artica member, Filipe Valpereiro for all the hardcore geeky support, he was the guy who told us how to remove the steering wheel lag caused by the xbee buffer.. and finally thank you Celso for believing in us!!!

Codebits was an amazing event! I totally wish to be there next year!

This was me during the Creative Robotics talk, you can see the video below. I was a bit nervous for no apparent reason, just hope to be more relaxed next time. During three days people could learn how to solder and build cool stuff, TV-B-Gone’s, Brain Machine’s, Boarduino’s, POV’s and a lot more. Mitch Altman’s Talk about HackerSpaces, a must see:

AltLab’s makerbot was there too, and there where lots of cool things being printed all the time (all photos were taken by Tiago Serra) END_OF_DOCUMENT_TOKEN_TO_BE_REPLACED

I was invited to assist Mitch Altman during codebits. I believe it is going to be an amazing experience.  :)
I will also talk about Creative Robotics on Friday at 2PM.